The stimulating day in Manchester concluded with a panel discussion This provided attendees with the opportunity to grill the day’s speakers, plus Alistair Brown, Museums Association Policy Advisor, who had recently finished working on the MA’s new Code of Ethicsand Janet Ulph, expert on Law and Collections Management and author of guidelines on Curatorially Motivated Disposal.
The discussion kicked off with a question on what the MA’s new Code of Ethics has to say about acquisitions and disposals. Alistair Brown gave us the welcome advice that there has been no radical change on these issues and that the MA’s position is that curatorially motivated disposal can and should be conductedand that, in certain circumstances, financially motivated disposal can even be conducted ethically. Janet Ulph added that, in addition to her rigorous guidelines on Curatorially Motivated Disposal, she will be producing a short guidance document on the additional obligations that the Government’s planned ratification of the Hague Convention will impose on museums and is also working on guidance for museums who face closure or the loss of a storage facility.
The discussion then turned to the question of what you should do if you receive an object in the post and you are in some way suspicious of its provenance. Janet Ulph emphasised that the act of someone posting it to you could be construe as an intent to make a gift; the receiving museum then has a choice whether or not to accept it. If it fits their collecting policy, they could then accession it; however, if they are suspicious, they should consult other museums. Either way, this is a good strategy: other institutions may have an expert who can give reassurance about the object’s provenance, and if they can’t, the recipient could at least make a fuller report to the National Crime Agency.
Following on from an issue that Gillian Smithson had raised earlier, the panel were then asked what a museum should do if they had transferred an object in the 1950s or 60s without proper paperwork or due diligence and the recipient then wanted to sell it. Alistair Brown stated that this is unlikely to cause a problem for the originator museum unless the scrutiny the sale draws will cause them reputational damage. Janet Ulph stated that, under the Sale of Goods Act, the recipient can sell any item he owns legitimately, so they would act legally. It was the UNESCO convention of 1970 that necessitated provenance checks – if the transfer happened before this was ratified, the originator museum had not done anything illegal.
A member from the National Galleries of Scotland then asked the panel how their various institutions deal with the disposal of non-inventoried objects such as packing crates. The team from the Museum of London mentioned that they, too, have some material like this to dispose of. They follow a less onerous procedure than they would for collection items, but still ensure that the disposal of these objects is documented. They conduct due diligence checks to ensure that set dressing is not in fact accessioned and, when this cannot be established, they take a risk-managed judgement.
The discussion concluded with a question about how we change the perception of disposals as being a negative thing to do. Janet Ulph explained that, to change this perception, museums must be very press-savvy and aware of how disposals can be reported (or mis-reported). Kevin Gosling suggested that the museum profession needs to change its ideas about collections stewardship and asked whether we could learn from nature conservation, where stewardship is a process of active management – you have to prune dead wood to allow saplings to grow. He also noted that disposal doesn’t have to mean destruction or sale and can mean that objects are used to greater public benefit. The team from the Museum of London shared a story about how one recipient was moved to tears at the generosity of their gift of what, from the point of view of their collection, was duplicate material and how a cooker once consigned to storage because it contained asbestos was rendered safe and transferred to the RAF Museum for use in public display.
This was a stimulating end to an enlightening day that left all attendees with a lot to think about the ethical and practical aspects of acquisitions and disposals.
By Susannah Darby, Collections Information Officer, Science Museum 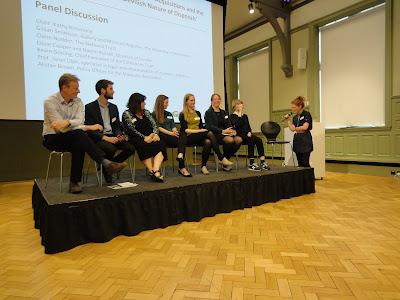