Brandi gave us an informative and lively talk regarding some of the more challenging acquisitions and installations that she has encountered.

An installation by Rikrit Tiravanija required food to be cooked but of course no heating up was permitted in the gallery. After negotiations with the artist, a compromise was reached and the food was provided from the cafe instead.

This was followed by a Robert Gober installation which required various modifications to the gallery space, and presented a few surprises. This in turn was followed by…bees! 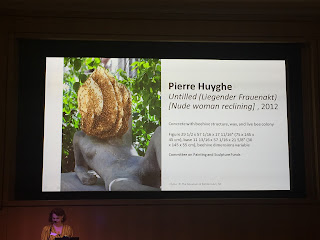 Talk about the unexpected! Most of us breathed a sigh of relief that we haven’t had to deal with these. Yet!?

Brandi concluded by saying this shows how important registrars are – to ask questions and document things properly. Her valuable advice (when faced with such challenges!) was to use previous displays as a learning experience and begin talks well in advance.

The registrars after us will rely on our good documentation, after all.

‘When is a gun a gun?’.
Hannah Kauffman, Deputy Registrar, V&A

Hannah explained the background story of ‘The Liberator’ and Texan law student Cody Wilson firing it in 2013.

The V&A’s decision to acquire a version of the world’s first 3D-printed firearm was both controversial and complicated. The gun represented a piece of manufacturing history; so the curator had to convince Wilson that ‘The Liberator’ was a collectible creative piece.

The real complications came when the import procedures were explored. Numerous legal departments were consulted such as the home office and HMRC, and it became apparent that the US and UK government definitions of a gun were different and the 3D-printed gun had exposed a loophole in the law. The US export documentation didn’t match the UK import documentation and only after Wilson was advised to split the major and minor components, could the import finally be completed – a year after the process began.

In the meantime, the V&A found a London 3D printer who could make a replica Liberator in just three days. Now the V&A has multiple versions of the gun. This thought-provoking talk illustrated some of the complex and sensitive issues facing collection and display of firearms (and the definition of them).