#UGRGMShed ‘Work together to strut your stuff’: An exhibition game for audience participation

For the final session at the UKRG event ‘Let’s Put On a Show! : Exhibition Essentials’, Nickos Gogolos, Registrar at The V&A, was invited to lead an interactive group session. To facilitate this, delegates were split into small groups, through random allocation given on their name badges at the beginning of the event. 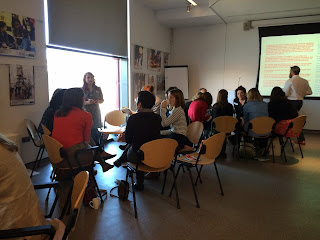 We were then given two different touring exhibition scenarios, with three groups working on each of these. Within our groups, we had to discuss the problems we would face and possible solutions and outcomes.

The scenarios themselves were complex, including multiple venues, large numbers of objects and various access and environmental considerations. In my group, the basis of our given scenario was an exhibition from a National Museum in London which was to go on tour. These 70 objects were to go to a local authority museum, and then to a National Trust Property with both venues being charged an exhibition fee.

We discussed the various points, though the discussion was a little slow to get going at the beginning people soon got into the flow! We talked about the exhibition fee and what we would expect this to include (we were hoping for transport, interpretation and expertise), the variety of objects and the lack of cases and staff at the local authority museum. There were also unknown quantities which we would need more information on in order to come to any decisions. With only 20 minutes, we raised far more questions than we could answer, but were able to begin thinking about some of the solutions, such as borrowing cases from the national museum. 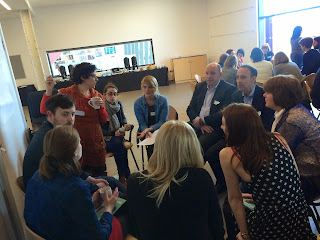 Nikos then asked for our ideas and solutions, one scenario at a time.  Many questions were fired at him, which he answered sometimes teasingly with a bit more information to keep us thinking and questioning, and sometimes to great amusement at the types of issues we all have to deal with! 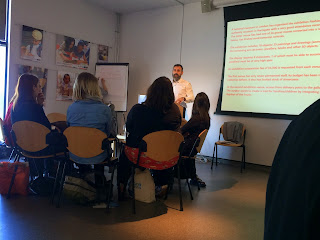 Some of the points discussed were;  the differing environmental standards in National Trust properties to those in museums, whether object numbers could be reduced in smaller venues or if they came as a package, whether the National museum could assist with mounting costumes, the length of timescales, sponsorship for display cases and whether installation could take place during opening hours.
This was a good opportunity to hear views from those in different institutions and from varying roles. The discussion felt quite short at the time, with the whole session taking only an hour, and I felt I wanted more time to hear everyone’s ideas, but in hindsight, I feel it left us with lots to go away and think about.