At the recent UKRG ‘Art of Acquisitions and the devilish nature of Disposals’ event Claire Nodder, House and Collections Manager/Assistant Conservation Lead, spoke to us about National Trust’s property Clandon Park in Surrey and the devastating fire of April 2015. This being anyone who works in collections worst nightmare, Claire explained how the fire has effected the property and its contents and how a policy of retention and disposal has been developed. The experience of Clandon Park and its staff presents a valuable lesson in how to plan for the worst.
Clandon Park is an accredited museum, and had 55,000 visitors a year. The Palladian mansion was built for Lord Onslow in the 1720s. The National Trust took over in 1956 and the house was refurbished when a collection of 18th century furniture and the porcelain collection of collector Hannah Gubbay. The house had very few indigenous objects, the attraction being the building. Other users and stakeholders in Clandon Park were the Surrey Infantry Museum, housed in the basement, a restaurant separate to the Trust, and staff accommodation.
The fire and the damage caused
On the 29th April 2015 a fire started in the basement, spreading throughout the building, eventually breaking through the roof. The fire brigade were on the site for eight days and helped many salvage objects, including cutting paintings out of frames. Once the Fire Brigade had left the property was handed back to the National Trust, who immediately shut the site down. As the fire had spread, rooms fell in on each other and damage to the structure was excessive. Before the property could be accessed, large burned timbers had to be lifted out using a crane to prevent further damage. Claire showed us before and after photographs of rooms which showed the total devastation caused by the fire. 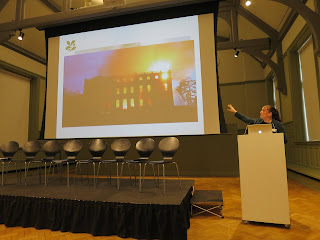 The initial salvage after the blaze involved assembling rescued objects on the front lawn as objects were coming out of the building. Inventory control was initially difficult, and made more difficult, by the lack of light. Clandon Park had an agreement with a local school as part of their salvage plan to be able to use a school building to house and process salvaged objects. Fortunately Clandon Park’s Collections Management System (CMS) was online and so in theory could be accessed remotely. However, the connection at the school was slow and staff reverted back to using paper for their inventory. Inventory and condition checks were carried out by curators and conservators, assisted by staff from nearby National Trust houses. At the time of the fire Clandon Park was in the middle of re-numbering their objects with a new numbering system-however, not all of the objects had yet been re-numbered.
After the fire
Claire explained how lessons had been learned from Uppark, Windsor Castle and Glasgow School of Art, all heritage buildings that had suffered fire damage. Stabilising the building had to take precedent, so there was no access to the building until September 2015, when the archaeological salvage began.  The processing of objects began with the site being divided into quadrants, and as objects came out, they were assigned a quadrant code and a room code. Due to the floors collapsing in on each other, objects were found in unexpected places within the ruin of the building. The House team were invaluable, drawing up handwritten plans of where objects were in each room. This knowledge was crucial, as was Surrey Infantry Museum providing photographs of their displays. 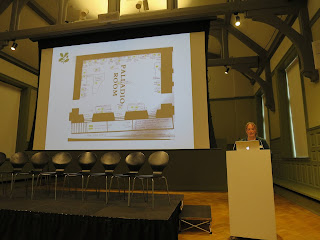 Retention and Disposal policy
Staff decided, ‘if in doubt, retain’. There were two phases of retention and disposal: the first, initial salvage from the building; and the second, post-salvage, ‘taking stock’. In phase one ‘material trees’ for each different material type were given to the archaeological contractors. Claire showed examples of these for ceramic, plaster, and wood. These showed types of each material that could be salvaged, and what to do with each piece. For instance, the ceramics material tree was divided up into sanitary ware, decorative tiles, utility wares and decorative ceramics, each with their retention or disposal instructions for the salvage team.
The ownership of objects being salvaged had to be established, with many objects being loans in – a registrar’s nightmare! CMS records were consulted to establish this and owners were being kept informed. As the salvage operation progressed, and more material came out of the house, the retention and disposal policy evolved. In the grounds of the house, the archaeological salvagers had ‘keep, ‘needs decision’, and ‘dispose’ piles. These could then be looked at by staff.
Recording
Staff set up a ‘salvage village’ in the grounds to process objects under cover in poly-tunnels. As the lead roof had collapsed in, all objects coming out of the house were contaminated, so everything went in to quarantine before it could be cleaned. With is no on-site internet access staff recorded information on Excel spreadsheets, also recording a percentage of how complete each object is, with some inevitably being as low as 1%. This does not, however, indicate disposal candidates as it is hoped more pieces of objects may turn up at a later date.
Going forward
The fire and subsequent salvage operation has given the National Trust the opportunity to learn more about the structure of the house, for instance, a pistachio nut was found in a piece of the plaster. The process for Clandon Park will be long, but it has been made easier by having a good salvage plan in place. Clandon Park are now working towards the formal deaccessioning process, though there are still rooms in the building that cannot yet be reached.
To follow Clandon Park’s future:
www.nationaltrust.org.uk/clandon-park
www.facebook.com/ClandonParkNationalTrust
https://twitter.com/search?q=%40ClandonParkNT&src=typd
By Rosamund West, Documentation Officer, Horniman Museum and Gardens