Provided by Sally Ann Coxon – Collections Registrar (Loans & Acquisitions) at National Galleries of Scotland – upon receipt of a UKRG bursary to attend ‘Wellcome to the Jungle: Loans of Fun, 9th February at the Wellcome Collection, London.

‘A museum of modern nature’.
Emma Smith, Exhibitions Registrar, Wellcome Collection
What is nature? How do we put nature into a museum?
This exhibition was made up entirely of objects lent or donated by the public, with their accompanying stories. There was no curatorial voice, the individual stories made up the interpretation for the exhibition. The public were invited to attend an event with an item that best summed up what nature meant to them.
Emma explained some of the questions and challenges raised.
How do we handle the loan? What on earth might they bring!?
A simplified two-page loan agreement was produced and advance planning was needed with the conservation department in case anyone brought hazardous items. Over 200 people took part in the weekend event dropping off objects. Most visitors used common sense. 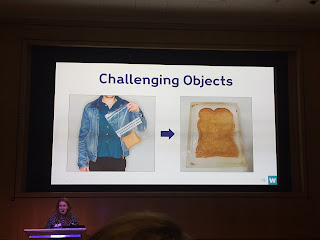 The most challenging material included was a piece of bread. After some thought and advice taken from other institutions, the bread was dehydrated and sealed in resin to prevent mould or decay pests becoming a problem.
Emma played us some voice clips of a few of the contributors talking about their objects and gave us a fascinating account of the June 2017 exhibition and how a crowd-sourced exhibition can work.
How do you solve a problem like a Fatberg?
Helen Parkin, Assistant Registrar, Museum of London
The world’s largest Fatberg (a huge congealed mass of fat, wet wipes and generally unpleasant stuff) was found in the sewers under East London in 2017, and the Museum of London decided to acquire a portion of it.
Helen explained some of the amusing yet very real collections management challenges presented with acquiring and displaying a piece of sewage. The initial questions were:

The Fatberg was felt to be an important and relevant addition to the displays in the year-long ‘City Now City Future’ season.

Conservators assessed it like any other acquisition, and the Due Diligence was considered. It was thought that there would be a low risk of people making a claim as they’d discarded the matter in the first place.

Much consideration was given to display. Should the fatberg be pickled? Damien Hirst’s formaldehyde pieces and Marc Quinn’s refrigerated objects were considered for inspiration. The best solution seemed to be to air-dry the piece, resulting in a hard, dry substance which could be displayed in a double-thickness enclosure, removing the risk of toxicity, disease etc. to staff and visitors.

In collaboration with Thames Water, close attention had to be paid to the hazards of working with sewage and use of the necessary personal protective and handling equipment.

These are not things you imagine you’ll have to study when you become a Registrar!