A write up of the talk given by Carol Warner, Manager, Government Indemnity Scheme and Sanne Klinge, Collection Registrar, Tate.

UKRG facilities reports and supplements are intended for all museums and galleries as standard documents, and we are using them all the time. They list general requirements and are the basis of information needed when negotiating loans. Carol Warner and Sanne Klinge spoke about the background, purpose and use of UKRG Facilities reports and an introduction to a proposed review. 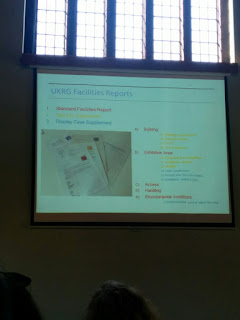 Carol refreshed our minds about what they are and what they cover; providing information about security, fire protection, environmental conditions, the borrowing museum’s practices, display details as well as general practical information. She reminded us that the reports should be regarded as a serious declaration as they are required to be signed and dated at the point of production. They also often form the basis for the National Security adviser’s (William Brown) reports and recommendations.

There are other known report formats such as the American model; however these hold different types of information and are not fulfilling our criteria so require additional questions to be asked of the borrower.

Sanne Klinge is heading up the process for reviewing and potentially changing the current UKRG reports. It has been some time since a serious revision and for this to be successful it will require effort and input from Registrar colleagues. The review will happen in the following stages:

Stage 1: A short survey will be sent to UKRG membership to gather feedback to identify key areas for improvement. The UKRG committee, Carol Warner and William Brown have already provided their views. The survey is due to go live in spring/summer 2018 – so please keep an eye out for this and respond.

Stage 2: A working group will be formed to discuss the survey results. If you want to be part of the working group let Sanne know. Other colleagues and stakeholders will be contacted for their input.

Stage 3: Implementation of changes. Some changes can probably be changed very quickly but other processes might take longer.

The length of the process is unknown and will be dictated in part by the results of the general survey. Areas for consideration: is there duplication in the reports or do we require more information? Should reports be consolidated or new reports created? Should the design and layout be changed?

Comments from colleagues in the room included having term definitions or glossary to accompany the reports; having facilities questions translated into other languages; making facilities reports more efficient to save our workloads; creating a standard that could potentially be used across other European or World institutions.

It would be fantastic to have a large involvement from the Registrar’s community so voices from all different areas of the sector can be heard.