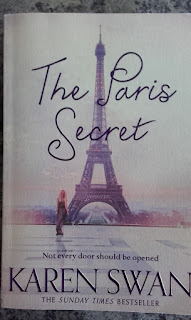 I was given this book and I thought from the cover it wouldn’t really be my kind of thing, but I thought I’d give it a try anyway.  As I suspected, I realised quite soon that the book was a romantic cliché and I was about to give up and put it in the charity bag, when on page 48 I read a reference to  the Art Loss Register.. ‘ It was the absolute first step on this path; nothing could be decided without the feedback from those records’.  ‘Provenance was paramount to explain how it had ended up here’.
Those lines made me sit up, take notice and carry on reading!  Someone was talking my language and the mantra of Registrars across the world.  The story unfolds of a young woman, Flora, who previously worked at Christies, and now works for a private art dealer.  At an exciting multi-million pound auction she receives the news from her employer that they have been asked to deal with a potential art collection sale for the Vermeil family in Paris.  The potential is unknown as the family have only just discovered the property they own exists.  It has remained untouched and closed for over 70 years.  It was last used in 1943 when it was closed up and given to a notary to secretly hold the deeds until certain other family members had died.  One last relative of that era is still alive, but she is aged 99 and refuses to give away any secrets.  The apartment has only come to light because someone has broken into it and made a discovery.
On investigating the apartment Flora discovers 203 paintings, 57 sculptures and 316 artefacts just as they were left lying around the apartment in a jumble in the 1940s.  Of course there weren’t just any old artworks in the newly discovered property; Flora uses her expert knowledge to identify Manet, Matisse, Picasso, Cezanne and Renoir – conveniently.  There follows a lovely process of cataloguing, even a kind of matrix of importance and type is put into use.  The type of collections management project many of my colleagues would delight in undertaking.  There are some twists and turns to keep you interested whilst the audit is undertaken such as the revelation of a duplicate apartment, a broody and moody handsome Vermeil son and even a fight involving a stuffed ostrich.  Who knew working with art collections was such fun?
And the due diligence continues, by page 71 the narrative explains to the reader that ‘..checking if a painting is reported as missing or stolen is ‘the first step in due diligence any time an artwork of this importance re-emerges on the market’
There is a brief discussion about how the uncontrolled environment in the apartment may have affected the art works, but this is soon dismissed with  ‘Obviously humidity would have changed throughout the year as the space wasn’t climate controlled, but all things considered, not a disaster’.  So luckily all the works are in good condition and ready to sell – if only they can just sort out that provenance.
Not surprisingly, once Flora starts digging, the possibility of the art stash being connected to Nazi loot increases.  ‘The resistance flooded the market with good-quality fakes to dupe the Germans as it was.  If we can’t show a step-perfect paper trail, all bets are off. The painting’s authenticity will be thrown into doubt if we go to market saying it was found in an abandoned apartment and clients explain how they came by it’.  So there is a race to prove both that the paintings are not fake and that they weren’t looted or bought from Nazi collaborators.
Depending on your point of view this due diligence chase is the focus of the book, or the development of the feisty romance between Flora and Xavier Vermeil could have been the intended focal point.  *(Spoiler)* Of course he turns out to be a gifted artist in his own right, but hides his talents from the world, of course both Flora and Xavier have unfolding tragedies in their families and of course they argue bitterly, realise they have been mistaken about each other and end the book falling into each other’s arms.  Not before the provenance has been proved I might add.
Flora correctly proves that the paintings had belonged to Jewish families.  At first she thought Xavier’s late grandfather, who had last used the apartment, was a despicable Nazi collaborator, collecting art from vulnerable Jewish families and then amassing a fortune from their misfortunes.  But then it is revealed that in fact he would buy the paintings and ship them to Switzerland, with a hidden compartment that would hide the children of the Jewish families and get them to safety.  He had been part of The Oeuve de Secours aux Enfants (Children’s Aid Society) a French-Jewish humanitarian movement that worked with The Resistance early in the War.
Overall, this wasn’t a great read for me, but I did enjoy the seeing aspects of the Registrar’s role being a central part of the novel.   I think this may be the only book that uses due diligence as a plot device to keep the heroine occupied in a location near her interest so that the romance can blossom.  If you like cheesy romantic stories, with some underlying good documentation principles – this is the book for you!
By Lynn Wall
National Museums Scotland