The Ebb and Flow of Collecting at the Whitworth

Gillian Smithson, Gallery and Museum Registrar at the University of Manchester, gave the first talk of the afternoon.
A programme of disposals was initiated in 2008 at the Whitworth, motivated by the forthcoming redevelopment. It’s a good opportunity to take stock of the process, following the completion of the redevelopment.
In the Whitworth’s 124 year history, over 58,700 objects have been accessioned into the collection. In the same period, just over 400 objects have been deaccessioned. Gillian questioned whether this ratio was sustainable going forward. She went on to explain that although it is difficult to say no to gifts, and there is also a sense of betrayal it is as the responsibility of the museum to care for objects. Many institutions have storerooms of objects that no one really knows what to do with, and having too much can be detrimental to the collection.
In terms of the history of the museum, the founders’ legacy allowed for lots of purchasing of objects in the early years, as well as accepting almost anything people offered. After World War I, finances were in dire straits, but people continued to gift works to the museum due to its reputation. The gallery became part of the University in 1958 and throughout the 60’s they really began investing. This coincided with the architectural changes to the museum; gallery spaces were now open plan. The acquisition strategy focussed on prints as it was easier to represent a range of European artists, rather than spending money on expensive oil paintings for example.
A new director in 2007 saw changes in terms of acquisitions; rationalising the collection, shared acquisitions and benefiting from the V&A’s purchase grant fund. The following year, areas of the collection were identified to focus on editing; furniture, ceramics, jewellery and multiple/duplicated items.
Advice was sought from the Museum Association in 2015 for guidance on curatorial-focussed disposals. When potential disposals were identified, a disposals form was completed and presented to an internal group which allowed for discussion by multiple people throughout the whole process. Disposals were advertised on the MA website, however Gillian felt the most successful responses were received when specialist groups were approached directly. 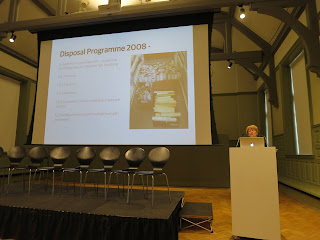 Gillian gave some examples of disposals that were completed after an open and transparent process, following the MA’s guidelines:
·         A group of ceramics were transferred to Manchester Metropolitan Museum to complement the existing collection.
·         90 pieces of Scandinavian jewellery that had been hidden since the 19th century were identified. These have now been transferred to the British Museum and some are on display.
·         The Whitworth also had some objects that were donated by Elizabeth Gaskell’s daughters. These are now in the process of being transferred to the Gaskell Museum.
However transfer of items to other institutions are not always possible. A collection of ties that were previously part of the Whitworth’s collection, for example, were sent to a charity shop as the museum’s remit did not include focusing on the collection of three-dimensional fabrics.
Issues that have been raised have included items that had no, or very little, information on their catalogue cards. Staff have had to question how to work with such objects. There were also items in the collection where the museum could not prove that certain things belonged to them.
Legally, museums face the challenge of holding some items that they can’t dispose of – for example a gift may have had certain conditions to it. A way to deal with these types of objects are to find other institutions whose collections would benefit from these objects and set up long loans.
Gillian concluded with a reflection on the present day. The museum is thinking differently about how they fill gallery spaces. The collection is becoming even more international and continues to grow, however it does this with a balanced view on acquisitions. Scrutinising the collection will continue as a subtle, diligent and logical process.
By Laura Murphy, Assistant Collection Registrar, Tate