Budget cuts are something we are all too familiar with hearing about, and Joanna Hayward, the Registrar for Lancashire County Council Museum Service, gave a talk on facing unprecedented cuts and how it affected her role.
Joanna’s talk started by explaining the sites covered by the museum service in Lancashire, a wide range including two castles, mills and an archaeological site as well, meaning their collections covered all disciplines from pre-historic to the modern day.  The service has a collection of over 150,000 objects and works of art, with their textile collections ‘designated’ as of national importance. 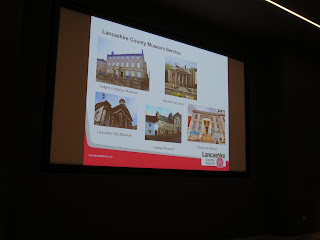 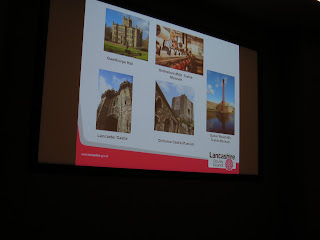 In 2015 the Council announced that it had to make cuts of £262million, an unprecedented amount, which meant services such as museums could not be afforded.  The council announced in August 2015 that they were to be closing 5 museums to the public on the 31st March 2016; Museum of Lancashire in Preston, the Judges’ Lodgings Museum in Lancaster, Fleetwood Museum, Queen Street Mill Textile Museum in Burnley and the Helmshore Mills Textile Museum in Rossendale.

Understandably there was a public outcry to these proposed closures. Joanna explained the different ways to manage the collections were looked at. Organisations and groups were asked to express interest as a result a stay of execution was put in place during negotiations for six months.

Unfortunately the aforementioned 5 sites were closed on the 30thSeptember 2016.
To transfer the collections to new owners, an inventory of it in its entirety needed to be conducted. Due to the task faced, everyone was called in to take part, volunteers were relocated and casual staff were trained. To save time, information was recorded at the minimum level, a major difference to before when the documentation level was above SPECTRUM standard. 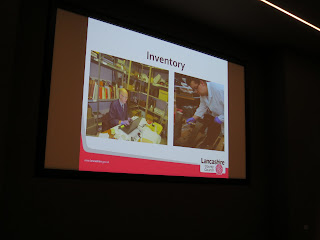 As is the case in many museums, the service has both loans in and out that needed to be considered during this turbulent time. Lenders and borrowers were kept informed of the situation, these included national and local museums, independent and private lenders. Joanna explained that letters were sent at every stage, letting them know progress and giving them information as soon as it became available. Through the documentation of the collection, it became clear that the list of loans was getting longer than the 115 lenders that were initially thought. 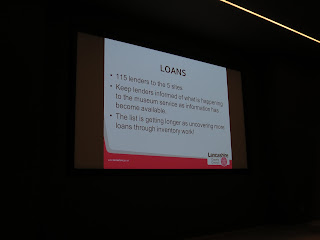 Other legal issues were looked at in the presentation including funding that the service had received and what the terms and conditions contained about closure, as well as objects that had been bequeathed to the service in wills and how the conditions of transfer could be affected by these.
Joanna concluded by explaining where the process was up to now; the service is looking at lending the collections rather than transferring them to new organisations. Although this is something that has been a concern for many institutions and services, it is actually happening to Lancashire’s collections and Joanna put forward that we need to look at different ways of working, become better cultural businesses and more enterprising to keep a bright future for the collections.
By Ruth Clapham, Assistant Registrar, Museum of Science and Industry